This weekend I did something that I haven’t done in a long time. I spent my weekend like a true Jakartan!

I started the day by going to my high school for a group exercise with my friends. It used to be a weekly routine that I started to do since November 2015, in an attempt to be healthier. However I had to stop doing it when I had an appendicitis last May and after two months of not doing any exercise.. yesterday I started doing it again and it felt so good! 🙂

Then, out of the ordinary, I ventured to Central Jakarta with my ex-colleagues. We decided to have lunch at Paramount restaurant. It is an old-school Cantonese restaurant located in Jakarta’s older part of town. It’s been there since way back and they say the quality never changes. It was my first time there and I love it! The food was delicious, service was exceptional and the vintage atmosphere made the experience more memorable.

We ordered a lot of food! Roast duck, crab soup, veggies, beef tounge, fried squid.. and the best one – some sort of deep fried boneless chicken tenders, covered by shrimp meat with crab sauce (!!!) holyyyyy! It was bomb.

Have you ever been there?

In front of the restaurant

After the feast, we decided to take a walk around the area to get coffee. I was sooo full and felt like I need to walk it off, the weather was nice – not too hot so I asked my friends if we could walk instead of taking the car. Some agreed, some still prefer to take their car, lol. But I had a very good time walking, felt so refreshed and along the way I found some culinary spots that seemed interesting. I guess I have to say, that I don’t visit Menteng/Cikini area often but when I do, I always gets excited. I’ll try to be back and visit these culinary spots sometime later… 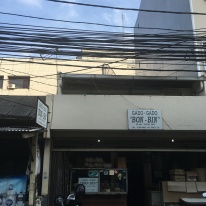 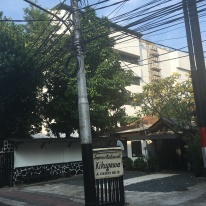 We had coffee at Spumante – still in Cikini area. The place does not offer coffee but also some cakes/sweets and hot meals. It was good! Did not take a lot of photos there because we were busy chatting, but I can say that the place is recommended. Then after I parted ways with the group, I went to meet another friend for dinner and drinks. She is my friend from University and it has been a while since I last saw her. We had good fun and had to leave only when the restaurant’s was about to close, hahaha. I guess it’s true what they say – time flies when you are having fun 🙂

Today I went to Car Free Day area with my friends. So Jakartan, isn’t it? Hehehe. It was busy, some brands were doing activation as well so there were a lot of things going on. We did not run, just walked, and had a good fun playing with the dogs in Taman Semanggi – which turned out to be some sort of dog park during Car Free Day. We saw a lot of cute dogs, so cute!

I also met something interesting when we walked… Hahaha.. yes, I took the chance of being in Central Jakarta to do Pokemon hunt as well! :p

So there goes my weekend. I hope you’re having a good one too, and feel ready to face Monday! (ah, will we ever though? :p)

25 thoughts on “A very Jakartan weekend”

Weekend photo dump 🙌🏼
What a fun week with @msaliaputri @aradiantcollapse! 💕 Amalia and I have known each other virtually since we both moved here but finally got to meet in person this week. Thankful for the occasion and our friendship! 🤗 (P.S swipe in case you didn’t get our photo reference hehehe)
Same spot, different days 😛 happy holidays! 🎄💕
Pictures from our backpacking trip to Chicago this past weekend 🏙🙌🏼🍂